Da Lat (VNA) – About 40 km from the center of Da Lat, Zoodoo Zoo is one of the attractive attractions of the city. This zoo model imported from Australia is a real success in Vietnam after more than five years of operation.

After 10 years of waiting, an Australian couple was allowed by Australian authorities to bring hundreds of wild animals back to Vietnam. Vietnam has allocated 16 hectares of pine forest to build this zoo on the condition that no pine trees are cut down.

At the zoo, visits are by tour and at certain times. Each day, Zoodoo offers seven one-hour guided tours to ensure the safety of visitors and animals. With an entrance price of up to VND 100,000, Zoodoo increases its income through selling souvenirs, serving meals and camping on site.

Also in Da Lat, in early March 2022, Frenzy tourist farm opened its doors to welcome the first guests to visit and take pictures of 200 sheep on the farm. To build such a herd of livestock from Ninh Thuan (Center), Frenzy’s staff had to study for 3 years. In addition to these sheep, Frenzy has also opened up space to house French pigeons, Alaskan pet dogs and plush rabbits.

Ms. Nguyen Thanh Thu Cuc, owner of the farm, said: “With an ecological space of 10 hectares in Da Lat, Frenzy will multiply her flock of sheep according to the model of grazing in the pasture.”

Recently, this model of farm combining raising horses, sheep and rabbits to entertain tourists has spread to many provinces and cities. A small farm with an area of ​​​​about 1 hectare with about 100 sheep and a few horses, the investment capital must be at least 4-5 billion VND. Relatively few, compared with several hundred billion dong invested by big companies like Vinpearl, Muong Thanh, Mango Garden to open animal parks, provide ancillary services (hotels, restaurants… ). For example, Dai Nam Zoo (southern Binh Duong province) opened 14 years ago, with an investment of more than 50 billion VND.

Invest in an animal park

Recently, the Department of Agriculture of Dong Nai province has agreed to lease the forest land to Ma Da commune (Vinh Cuu district) to establish a picnic resort. In 2017, the management company of Vuon Mango eco-tourism area, in Phuoc Tan district, Bien Hoa (south), for more than 10 years, proposed to invest in the project of Vuon Mango 2 with an amount of VND 1,000 billion. 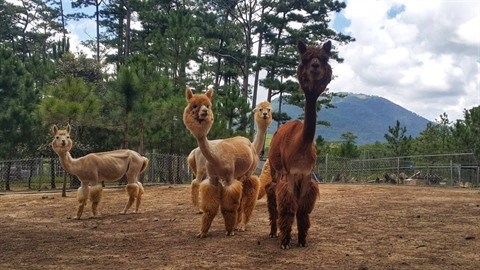 This project is home to a large number of wildlife imported from South Africa. In view of the increasing number of limited animals, Vuon Mango Company proposed to invest in the Mango Garden 2 project. Up to now, Vuon Mango semi-wild zoo has allowed successful breeding of many kinds of wild animals.

With the development of tourism, some real estate companies have chosen to invest in animal parks. That is the case of Vinpearl Safari Phu Quoc with 3,000 animals of 150 different species or Muong Thanh Safari Land, Dien Chau, Nghe An (Center) with more than 2,000 individuals of 80 species. Many tourist areas are about to open soon such as Ha Long eco-tourism and nature reserve, Vu Yen wildlife care and conservation park in Hai Phong (Northern), games and ecological conservation areas. Gia Lam on land, Hanoi and Binh Thuan safari eco-tourism area (Center).

To meet international standards, these zoos or open zoos are both striving for so-called Wildlife Welfare certification for animal welfare and plan to join the World Zoo Association (WAZA).

With the awareness of animal rights, the investment in this type of park has become obvious. In traditional zoos, visitors know little about the living conditions of these wild animals. Many species that live in groups are often separated to be kept singly or at most in pairs.

Vietnam currently has about 18,000 registration centers for wildlife rearing and conservation, including many zoos built long ago, cramped and unsanitary.

“For zoo animals, it’s not enough just to keep them safe, it’s also important to keep them happy by taking care of them and creating an environment,” said Dave Morgan, a wildlife expert. live as best they can, closer to their natural habitat.

Animal rights organizations around the world have proposed a plan to eliminate zoos within 25 to 30 years. This time will be used to plan the animals’ diets, habitats and return to the wild. In Vietnam, public opinion wants zoos to implement safety programs for the return of animals to the wild. – CVN / VNA